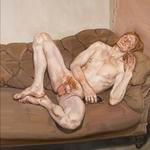 Lucian Freud is one of the most widely admired figurative painters of the second half of the twentieth century. While his style has changed dramatically over his career, his main subject matter - the human form - has remained constant. Freud's mature works often seem as if he has created flesh through paint. Naked man with rat is a perfect example of this. There is a complex and somewhat awkward feeling about the painting, for which Freud's application of paint is largely responsible; it encourages us to read all the various elements as being on the same register, as being similarly important. This adds to the disquiet of the scene as we keep discovering new details and nuances between areas of flesh and wall and couch.

Freud's subjects are never strangers. They are always people in his life - friends, lovers, family and fellow painters. He finds that professional models are not 'naked' enough because they are so used to being stared at. Freud works with his sitters in his London studio apartment, painting at all times of the day and night for months on end until each work is finished.

Lucien Freud was one of the most important and admired figurative painters of the twentieth century. Across a career spanning from the 1940s until the end of his life in 2011, his work has (with rare exceptions) focused on the human figure. His mature works, of which Naked Man with Rat is an excellent example, are known for their densely painted surfaces and their unflinching, sometimes unflattering, representations of the human form. As paint becomes flesh, he pares us down to biological forms, more nature than culture. In this, what Freud also achieves is a balancing of the human and their context so that rat, couch, man and floorboards all register with the same intensity. He painted a world where we are just one thing among others.