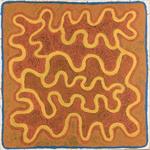 This is a depiction of Willy’s country in the harsh dry season. The rains have stopped and the water has dried up leaving behind salt pans, red earth, dry creek beds and shifting sand dunes. Willy Billabong has his own unique style of painting. His inspiration comes from the desert landscapes of his country. Willy was born c1930, he belongs to the Kukaja language group and his Country is that around Mungai Hills, near Yagga Yagga community, several hundred kilometers south of Halls Creek. He painted for Yarliyil Art Centre in Halls Creek.
An underlying theme to Willy’s work is the creation story of how the water and rock holes were formed in the desert. Back in the dreamtime the people were still animals. Among them was the rainbow serpent, a snake with great power. It travelled underground creating giant holes which formed the water holes in Willy’s home lands. These sites were very important throughout the dry arid lands of the Western Desert regions so the rainbow serpent would often leave another snake to oversee and protect the valuable water source. This ensured that the water source would always be there for the benefit of people and animals. You can see the influence of this story reflected in his paintings.