Christ in the Wilderness: 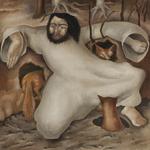 In the autumn of 1938 Stanley Spencer found himself banished from his beloved Berkshire village of Cookham, the inspiration and setting for most of his major religious works. The reason for his departure was fairly simple, although it was the result of his very complicated personal life at the time. Following his disastrous decision to divorce his first wife, Hilda Carline, and marry Patricia Preece, Spencer had made over the ownership of his house, Lindworth, to Preece who had subsequently let the house, leaving Spencer essentially homeless.

By winter time Spencer was established in a small flat in Swiss Cottage, London. He came to think of this period of exile in London as being a watershed in his life; the enforced solitude being a time of self-exploration that he hoped would offer him a way to strip back his painting to find a balance between the spiritual and the physical after his intensely sexual paintings of the mid 1930s. He returned to the Bible for inspiration, and was attracted to the potential of the accounts in the Gospels of Christ's forty days and forty nights in the wilderness as a subject. Also important for Spencer in reconciling this tension between the sacred and the profane was his reading of Thoreau's Walden at this time, which, as recorded by John Rothenstein, Spencer felt 'gave him a deeper understanding of the relationship of men with nature, and in particular of the possibilities of living a passionate life alone in a wilderness'.

Spencer first conceived of the Christ in the Wilderness series as consisting of forty paintings, one for each day and night Christ spent alone. As the works were intended to be part of the decorative cycle of his Church-House, he first drew up a grid, based on the ceiling of the chancel of Cookham Church, and made a thumbnail sketch of each of the panels in position. This idea was later modified, with Spencer intending the works to form a mantelpiece shrine, a new painting to be placed on the shrine for meditation upon during each day of Lent.

From that first rough sketch Spencer made eighteen squared-up drawings, but had only completed eight paintings in the series and commenced a ninth by the time he stopped working on it. Four of the paintings were painted in the London flat over the winter of 1938-39, another each in 1940, 1942 and 1943, while the last was completed over a decade later in 1954. In spite of the delays in their realisation - fifteen years in the case of Christ in the Wilderness: The hen - none of the paintings deviate from the compositions developed by Spencer in 1939. Even at the stage of the initial sketch, the vision of the final work was complete in Spencer's mind and evidently there was no need to modify it. The making of the paintings was, in a way, a form of more detailed colouring-in of the preliminary drawings, and this mode of working can be clearly seen in the last, unfinished painting of 1954.

Spencer commented to his niece that he was attracted by the lack of detail in the Gospels about what Christ did in the wilderness as it gave him 'an excuse for imaging what his [Christ's] life might have been like. And I rather liked the idea of Christ and Nature - simply'. Spencer also made it clear that he identified with Christ, seeing parallels between what he imagined Christ's experience of homelessness to be and his own spiritual journey into the wilderness: 'I did ... forty little squares and then filled in as many as I could with how Christ may have spent each day, the great adventure all by himself with leaves and trees and mud and rabbits and rocks, just as I was having among two chairs, a bed, a fireplace and a table'.

Unlike the religious works that come before and after this series, and which teem with figures and narrative incident, in the Christ in the Wilderness series Spencer focuses on the solitary figure of Christ, emphasising Christ's isolation from mankind at this time and his closeness instead to the world of animals and plants. In all eight completed paintings and the preliminary drawings the figure of Christ fills the frame. This close encounter with the body of Christ forces us to acknowledge also Christ's engagement with the sensuality of nature - be it hens, flowers, stone or scorpions - which ultimately enabled his emotional journey to a point of calmness where he could experience the 'spirituality of solitude'. This was also Spencer's goal.

Title
Christ in the Wilderness:
The foxes have holes

Christ in the Wilderness: